At Toursec we work in one industry, entertainment

Toursec continues to be involved in many of the region’s largest events. We are uniquely qualified to fully oversee all aspects of safety. That has led to us doing just that, developing every aspect ranging from risk analysis to contingency planning to executing what have been described as some of the best run shows in the region.

At Toursec, we not only have our own venues under contract, we have also managed events at arenas that use other providers.At our sites, we work with the venue to develop an effective program that not only maintains appropriate order, but we are also integral in event an emergency arises.

Tour security is something a lot of companies may offer, but few actually deliver. Our involvement in tours has included names known the world over and includes services into the US. We develop riders, know the various regulatory obligations and have worked with or employed firms across Canada and the US. 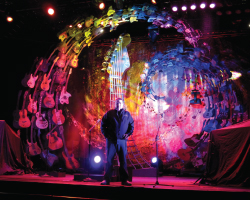 Dan is a professional worry wart, best identified by his use of the phrase stuff happens (or something close to that). Dan is the principal of Toursec, with over 25 years under his belt.

When he’s not running things at a show, he’s a chronic educator, both as an instructor and a student. Dan holds a degree in Emergency Management, a concentration from Dalhousie University in Law and Justice and has trained abroad in multiple academy and police agency settings. This includes training at the DHS FEMA Emergency Management Institute in Maryland and at Manchester Metropolitan University in the UK. As a result, Dan is a subject matter expert in Mass Gathering Life Safety, Use of Force and carries more than two dozen DHS/ FEMA credentials. In terms of teaching, Dan is a Department of Justice qualified instructor in all levels of force including verbal continuum, multiple physical tactics programs, oleoresin capsicum, Taser and firearms. He also instructs on the Canadian Incident Command System and has authored programs for the event industry, as well as policing.

At an event you won’t see Dan trying to take selfies with the band. He does lots of technical and boring stuff that people at a show never even know happens. It all begins with Safe Venue Design which includes a myriad of terms like NFPA/ UK standards, risk matrix, capacity, throughput, crowd control and more. Next up is risk/ gap analysis and the development of mitigation strategy. More than just convenient buzz words, things here can be a huge impact as people’s lives can be in the balance. Finally, on show day Dan wears his most important hat of all. It is here that when the wheels fall off, chances are it was planned for and he steps in. At the most cutting edge shows, Dan is an Incident Commander, the very top position in ICS. The Incident Command System is a collective of police, fire, EMS, other response and regulatory agencies. It’s been used for every major disaster from 911 and Katrina in the US to Canadian fires in Slave Lake and Fort McMurray. At events, it’s used at the Super Bowl, NASCAR and the Olympics. Canada is catching up and Toursec was the first to integrate and become a part of the ICS structure in 2007.

Dan is all over the map, literally. From Vancouver to Newfoundland to Orlando and LA, his life is events year-round. The one thing you can be sure of is his passion for events, committing considerable time and resources on education, Event Life Safety and the positions he holds. You can count the number of people at this level in Canada on one hand, in truth, most likely one finger.

Choosing a security provider is a significant undertaking. The company you choose is on the front lines, representative of the event.

A few simple questions can answer whether the company is up for the task:

What qualifications do the leaders bring to the table? They are the ones on the ground and making decisions so they should have the credentials to back their positions up. Look for real accreditation. Street smarts is simply an apology for no education.

What training do the security teams have? Well trained means nothing, look for certifications that are nationally recognized and programs taught by established instructors.

What do the police think? Police deal with the security companies and are well qualified to know whether they are any good or not. Look to them for guidance.

The final question is the most important. Is the company able to respond in an emergency?

Why we are different?

What you can be assured of is that when we make a claim, we more than expect it to be scrutinized.

Toursec has steadily built a reputation of delivering services in excess of the typical for clients committed to safety.

We work with police, fire and EHS as part of the risk assessment and planning team. We develop the response and we are in the exercises to test it.

We are proud of our people. We don’t hire off the street to fill a shirt. Our people can act in any emergency.

We are respected. Our management team who work the shows are EM trained, can teach in an academy setting and are among the most qualified in the country.